First things first, I had better tell you that the idea for this post sprouted when I was listening to this song on the radio this morning.

If you haven’t heard it, go ahead and hit the play button, turn the volume up, and everything I am about to say will probably make a bit more sense.

One of my first posts was about growing up, and the fact that unfortunately there are no mile-stones, or certificates, or any kind of acknowledgement of any kind that you have become an adult. You simply wake up one day and realise that you have been an adult for a while now and you have no idea how it got this way.

Well, I was listening to that song this morning, and it got me thinking about what it is to be a man, or more specifically, ‘The Man‘. I should explain that I grew up without a Dad, or any form of consistent male role model, other than the father figures on TV I had no real way to find out who or what a ‘man’ was. I remember being about 6 and finding it really strange that other kids had men who lived in their house, I knew that people had Dads, but to see them living in the same house as them seemed a really alien concept. I’m not really sure what I thought happened to the men when Mums took their kids home, but I certainly didn’t think that they all lived in the same house.

This is why the feeling of being ‘The Man’ eludes me, I know I’m a man, at least I was the last time I checked. But watching TV and Movies, and using those lessons to tell me what a man should be, has taught me that every man has one thing that happens in their life, one moment of pure transition that turns them from boy to man. Like a Doctor Who regeneration of unadulterated testosterone that makes ladies undergarments peel away in red-hot lust. Sometimes it comes from loosing your virginity, other times its winning a football match, or beating an opponant in a drag race, or building your first fighting robot.

However it happens I have been told that it happens, to every man, everywhere. Except me.

Maybe it is because my fighting robot never made it past the ‘oh yeah that would be a cool idea’ stage, but I have never experienced that one edifying moment of pure manliness. I have had moments where I have felt manly, I have lit fires, climbed things and got stuck, put shelves up, had sex, drunk beer and even worked out once. But I still don’t feel like I scored the goal that won the season, or shot the paintball that turned the tides of the match, or stopped bullets in mid-air. 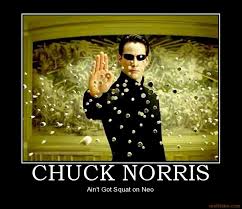 I guess what I am trying to say is that I don’t feel like ‘The Man’, and I don’t think I ever have, I feel like ‘a man’ (except for the boy who lives inside all men), and I’m not sure if this is because I haven’t reached the Doctor Who transition stage of my life. Or if it’s because, like growing up, you need hindsight to really appreciate the feeling of being ‘The Man’, or lastly if it’s because being ‘The Man’ is nothing more than a state of mind which one possesses.

Which ever one it is, I’m not sure I will ever have the answer untill it either happens, or I gain the hindsight to be able to look back and say, yeah, I’m The Man. Unfortunately, at the moment, I feel like a fraud when I sing along to this song, but one day I hope that I’ll be able to sing it with a big ‘ol smile on my face. And I’ll be able to go ahead and tell everybody, I’m The Man I’m The Man, I’m The Man.