and I found out that the Deputy Prime Minister, Nick (where’s my spine gone?) Clegg was going to appear on The Last Leg. It offered a double whammy of joy, firstly; Nick Clegg/Last leg, get it?

Secondly, I love to see politicians making absolute d**ks out of themselves, trying to be cool for the younger voters, and generally being lying squirming s**t bags.

So I poured myself another fat glass of wine in preparation for what I imagined would be the biggest train wreck since Macaulay Culkin! 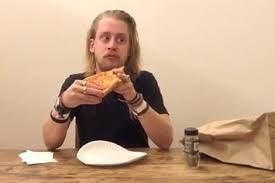 But as it turns out, he actually did ok. For a spineless, quivering, ass goblin he  came off pretty well. I mean, he didn’t answer a lot of questions, I kind of understand why, but by the end of it I didn’t hate him! Which was odd, in some parts he was actually quite funny, and he was a good sport, I didn’t even hate him when he threw a grapefruit at a disabled guy.

Was it enough to make me want to vote Lib Dem? No, even if they boot that little haemorrhoid out of the party, I still wouldn’t vote for them. As George Bush said; “Fool me once… Shame on… Shame on you”… I forgot where I was going with this!

My point is, to a certain degree, we saw Nick Clegg last night, I imagine he had his very own Malcolm Tucker (that link is a million miles of NSFW by the way!) waiting in the wings ready to pounce with a tirade of abuse for the flippy floppy c**t during the ads. But at least for a change we saw that the people making the decisions are humans, just like us. I think that’s the real trick to getting the younger vote, people say that the young don’t care about politics, but from what I’ve seen that just isn’t true.

I think that young people don’t see humans running the country, they see politicians, just like we don’t see humans on a movie screen, we see celebrities. The world of politics might as well be set in the Marvel Universe for all the relevance we see in our daily lives, the amount of petitions I’ve signed, protests I’ve seen, Facebook groups I’ve joined, and all for nothing! The politicians just don’t want to know!

They either don’t care what we’re saying, or, they simply can’t hear us. Either way, we might as well be yelling at the Hulk to fist f**k Loki when watching the Avengers, for all the good it will do.

But maybe there is hope, I know that last night we saw a failed politician appearing on a comedy show, it’s not much. But if more politicians were willing to step outside of their gilded cages and actually behave like the fragile, vulnerable, errable human beings they are for five minutes, maybe we can begin to have real discourse regarding the clump of dirt we all call home.

But you could say to me, “Oh, but Charlie you handsome SOB, politicians have been going on TV for ages.” and I would agree, but if you look at people like Boris Johnson, love him or loathe him, he is very popular. I think this is because of his seeming low tolerance for bulls**t, same with Farage, popular guy (sort of anyway) and apparently ‘Man of the People’. They both have one thing in common, they are fallable, and they seem to admit it.

Imagine instead if politicians didn’t just seem to be like that, but were actually like that. Imagine if instead of cover ups, and resignations, they held their hands up and said, “Yeah, I’m human, I f**ked up”. I know I would have infinitely more respect for that person, might even vote for them. Soley because I can see that they are just like me, which is what I want in a representative, not some styled, pre-packaged, spoon fed puppet, a real person, representing real people.

I think if we had that then, maybe, finally, we could begin to build a future that benefits everyone.